HERITAGE MINISTER PABLO RODRIGUEZ has promised a policy directive to the CRTC with cabinet instructions on the implementation of Bill C-11.

Point number one of the new directive should make Canadian content certification more relevant to the Canadian experience by including qualitative judgments on domestic topics in video content. I posted about this recently, as have others. The minister’s signal is that he has an open mind.

Point number two is to direct the CRTC to reassess existing regulatory supports for the money-losing local news industry.

So far, it seems the debate over the UGC — in blogs, tweets, and witness appearances before the Heritage Committee — has been binary: the UGC is either entirely within or outside the law.

UGC appears in Bill C-11 no because the government seeks the power to control its content. This could indeed become a problem one day if the government introduces an online harms bill. But as I posted earlier, C-11 is written to close the door on overseeing UGC content.

TOS is in the bill because hosting platforms like YouTube act as broadcasters even though they are direct-to-consumer platforms for media creators, very different from content curation broadcasters Bell Media, Rogers , VAT, Netflix or Disney Plus.

The government wants hosting platforms to share responsibility for creating and distributing Canadian content, which means adapting CanCon regulations to a new business model where programming consists of unorganized downloads.

Tory MPs and other C-11 critics seem to be reluctantly (and tactically?) admitting that Netflix and other major US streaming platforms may be appropriately covered by the new Broadcasting Act so they can begin to take on their fair share of the burden of creating and distributing Canadian content. But those same MPs and critics made it clear during this week’s heritage hearing that they remain opposed to regulating YouTube and other hosting platforms.

Alas, the UGC debate risks becoming a dialogue of the deaf.

On the one hand, C-11 makes it clear that UGC programming will only have regulatory impact if it is sufficiently commercial in nature, triggering obligations for the hosting platform to contribute cash to Canadian media funds and to promote Canadian content channels in its recommendations to viewers.

On the other hand, opponents of C-11 do not want to participate in even this limited regulatory activity, fearing that CanCon’s mandatory recommendations will alienate the global audience of Canadian creators. Matt Hatfield of Open Media went so far as to denigrate the Broadcasting Act’s rules for labeling Canadian content as “parochial”. All this despite the fact that the Liberals announced in the House on March 30 that they would not regulate programming downloaded by “digital first creators”.

Amid the controversial noise, Irene Berkowitz, a professor at Metropolitan University of Toronto, appeared before the Heritage Committee to focus on how content creation and distribution by Canadian digital creators actually works.

Berkowitz published his study on the YouTube broadcasting platform Watchtime Canada in 2019. Sure, it’s now obsolete, but it’s still a vital review of how streaming works on the hosting platform as a business model. The report was commissioned and paid for by YouTube, and Berkowitz is adamantly opposed to regulating the hosting platform, but given his perspective, it provides a good study of the landscape for heritage MPs.

Here are some facts about this landscape:

YouTube is a hybrid of different online platforms, including:

YouTube’s entrepreneurial luster is a free platform with a potential global market (Berkowitz provides data on major export markets in the US and UK, with India and France still ongoing in 2019) . Unlike the organized streaming industry, YouTube creators don’t have to sell their copyrights to broadcasters and studios to reach an audience.

So which part of YouTube is a candidate for regulatory obligations supporting the creation and distribution of Canadian news, sports and entertainment?

YouTube’s UGC programming that is most analogous to regulated streaming is video content on spin-off streaming platforms and multi-channel aggregators, and audio content on music services. This programming is monetized by advertising revenues taken from the rest of the Canadian media universe (and subscription revenues in the case of the premium music service). It is difficult to appreciate an argument that this programming should not generate regulatory obligations for YouTube.

But then that gets complicated when you consider the YouTube ecosystem of early digital creators.

First, there’s the argument that discoverability — forcing YouTube to push Canadian content — could backfire on independent artists and small businesses seeking the global market. I remain convinced that this is a real danger, but it is not something we want to be mistaken about.

Second, in 2019, there were 160,000 Canadian creator channels (of which 40,000 were monetized and about 15,000 were owned by artists and small businesses making real money there). They generate thousands of video posts. How much do we want to spend officials’ time watching them and certifying their Canadian content? (Please see the graph above, borrowed from the Watchtime report, for more information on the revenue distribution among the 40,000 monetized channels.)

Third, if the programming of these early digital creators were to be factored into YouTube’s financial responsibility to contribute to Canadian media production funds, how are we going to deal with the possibility of YouTube passing these costs on to creators by amending 55/ 45 ads shared?

Maybe all of these challenges are surmountable, but the CRTC might just look into it and decide the regulatory pressure isn’t worth it.

Here are my instructions to the CRTC:

A footnote on the discoverability of Watchtime 2019 Canadian content:

Professor Berkowitz points out in her study that YouTube is a global media platform, unlike the national distribution of conventional Canadian media, and therefore caters to Canadian viewers seeking this global content.

In preparation for the mandatory discovery bond debate, Berkowitz posed a series of questions to his 1,200 viewers. attendees. Survey questions are notoriously blunt instruments given their brevity, but here are three interesting questions and results: 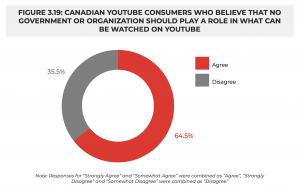 Given that the question can easily be interpreted as soliciting opinions on censorship (as opposed to discoverability), the results are not surprising. 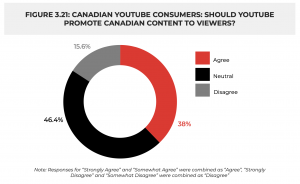 A high rate of indifference to this question, but much more positive than negative. 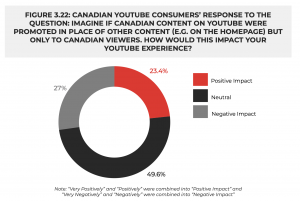 Even when you frame this question as a zero-sum proposition – promoting one type of content means less of another – the conclusion is mixed and calls for further questions of inquiry.

Graphics borrowed from the Watchtime report.

Howard Law served as Unifor’s Local Media Union Director from 2013-2021. He now blogs at mediapolicy.ca, where this article first appeared.

The National Liver Distribution Policy is disproportionately harmful to patients living in the Midwest and South and must be reversed by the Biden administration, say U.S. Sens. Jerry Moran (R-KS), Roy Blunt (R -MO) and 14 of their colleagues. In a Jan. 24 letter to U.S. Secretary of Health and Human Services (HHS) Xavier Becerra, […]