The euro’s exchange rate against the dollar benefited considerably when the European Central Bank indicated in February that a historic change in its monetary policy could be underway and that differences with the policy process of the Federal Reserve were likely. (Fed) could possibly help EUR/USD rally further.

Europe’s single currency had fallen precipitously against its US counterpart since the early days of 2021, but the downtrend came to a halt in February when market profit-taking on bets in favor of the dollar were followed by signs of a change of course in the policy orientation of the ECB.

This has caused analysts and economists to update their forecasts in anticipation that the ECB could start raising interest rates at the end of 2022 or in the first months of next year, with many suggesting that could end the era of negative interest rates. in Europe.

“The introduction of negative rates in 2014 led to massive outflows from European bond markets and significant underperformance of the euro, beyond what could be explained by changes in credit spreads and bond prices. Similarly, the exit from negative rates can help stem persistent outflows from fixed income and support the currency,” says Zach Pandl, co-head of global currency strategy at Goldman Sachs. 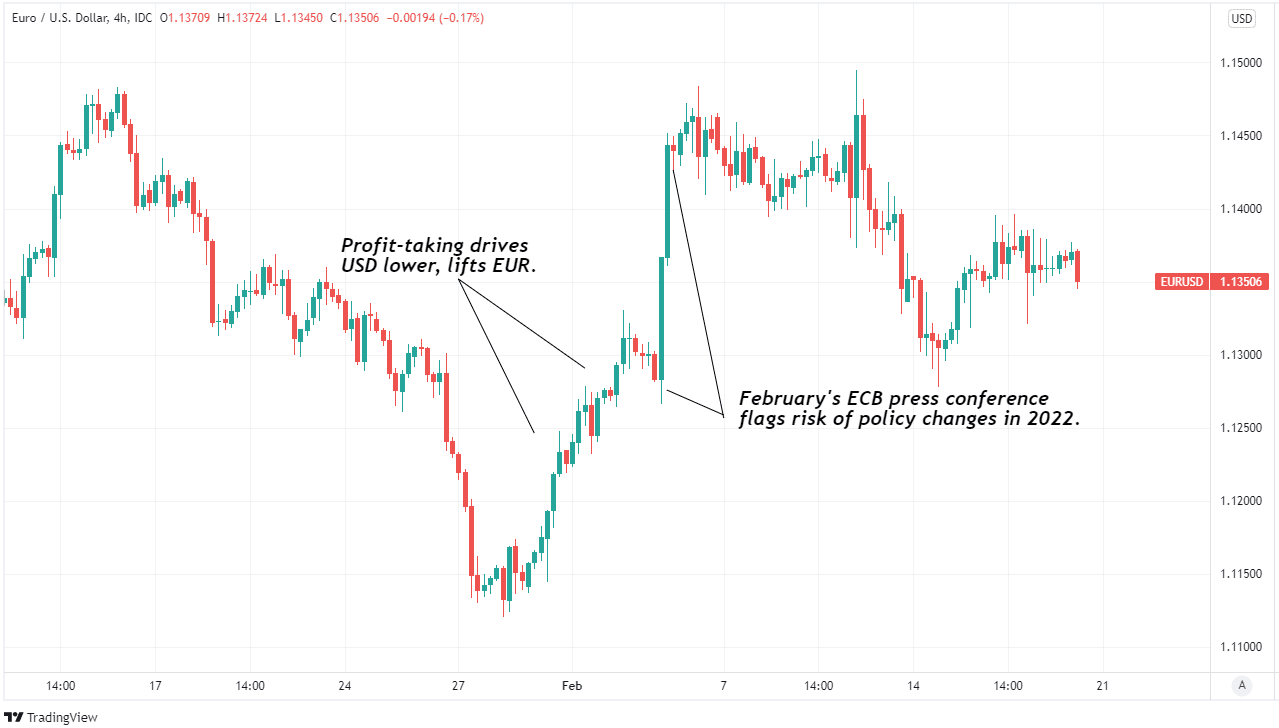 Above: Euro-Dollar rate displayed at 4-hour intervals. Click on the image for a closer inspection.

Before the ECB raises interest rates, however, it should first end its two quantitative easing programs and decide what to do with the trillions in eurozone government bonds it has sucked up. during the pandemic as well as over the years since 2015.

This is a key area where the normalization of monetary policy by the ECB could be different from the processes underway at the Federal Reserve, the Bank of England and some other central banks, although such difference is not necessarily negative for the euro-dollar and other European exchange rates. .

“There appears to be growing momentum on the ECB GC for a possible earlier than expected liquidation of the APP. We are still eyeing a rate hike in the fourth quarter and looking for opportunities to acquire Euro in the period ahead,” said Jeremy Stretch, head of currency strategy at CIBC Capital Markets.

All economies, currencies and central banks are different in their own way, but this is especially true of the ECB, which presides over a monetary union between 19 different countries while each of the underlying economies is governed individually from their respective national capitals.

But within this union there are also big differences between the constituent economies, some of which could pose a unique and significant challenge to the ECB as it seeks to recalibrate eurozone monetary policy for an era of weak Inflation levels can no longer be taken for granted.

“There is a point where credit spreads cease to be a rate differential factor and begin to have implications for creditworthiness. Once that point is crossed, we would expect FX investors to trade credit spreads wider as a negative impulse for the EUR, so the pace at which the ECB exits QE from March will be of considerable importance for the currency and credit markets,” said Stephen Gallo, European Head of FX strategy at BMO Capital Markets.

Among the financial differences, the most notable is the variation in national debt levels which, if not taken into account by the ECB, could potentially prevent a uniform application or transmission of the bank’s monetary policy to each of the different economies in the bloc.

Although currencies normally tend to profit when central banks signal that interest rates are likely to rise, the danger for the euro is that when the ECB does, markets could start demanding levels disproportionate and embarrassing interest from some eurozone governments. 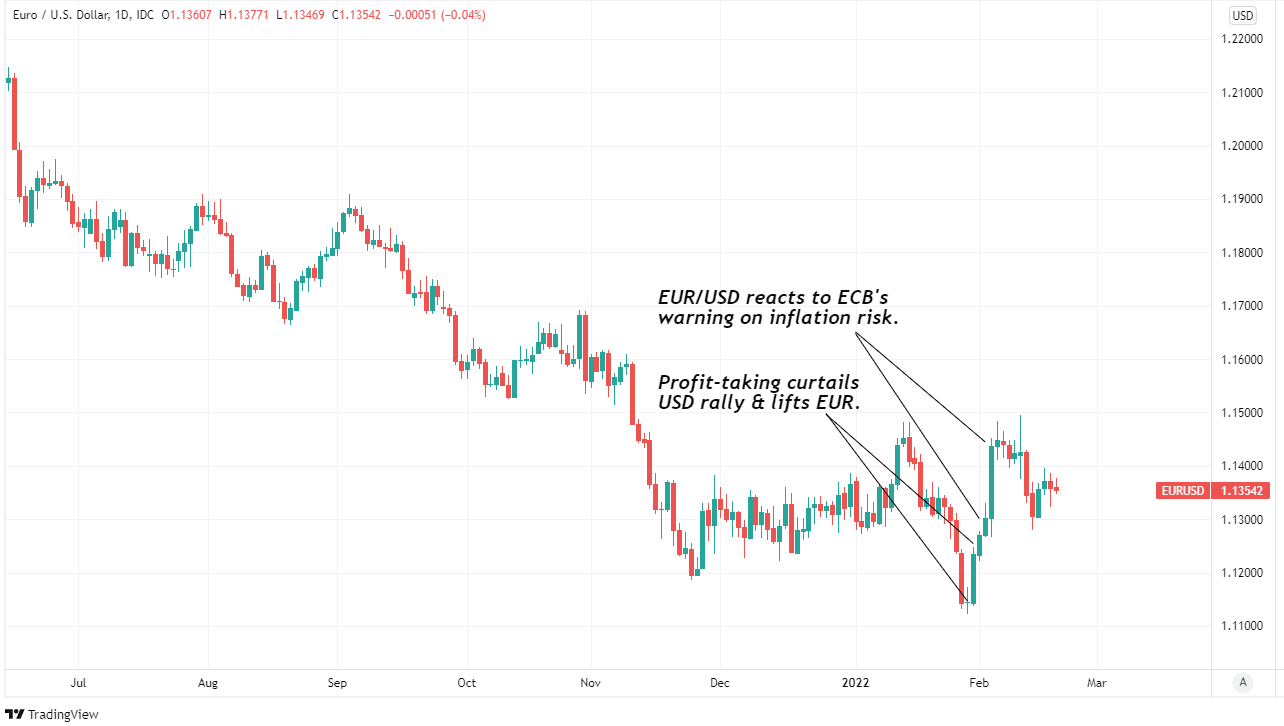 Above: Euro-dollar exchange rate shown at daily intervals. Click on the image for a closer inspection.

Secure a retail exchange rate between 3 and 5% higher than that offered by major banks, learn more.

This is a legacy of the Eurozone debt crisis and, if left unchecked, could be enough to deprive Europe’s single currency of any benefit from the possible imminent normalization of monetary policy. of the ECB, although this is also a risk that can be addressed by plans that the ECB already has in place.

“It’s a potentially serious problem. But we don’t see it as an imminent risk, even for fiscally troubled eurozone members like Italy. Like many other central banks, the ECB has swallowed up nearly -total increase in public debt since 2015,” says Holger Schmieding, chief economist at Berenberg.

“We expect the ECB to deliver on its commitment to reinvest proceeds from maturing bonds until the end of 2024. If the ECB wanted to reduce its balance sheet, it could do so by offering less generous terms for its refinancing operations long-term targets,” Schmieding wrote in a recent research.

The ECB announced in December that it would continue to reinvest the proceeds it receives from national governments each time a bond held on its balance sheet matures, and stick to this policy throughout the Raising its interest rates could provide policymakers with a valuable and supportive mechanism for the euro to shield eurozone economies from what the ECB calls “financial fragmentation”.

This would distinguish the ECB from central banks like the Fed, the BoE, the Bank of Canada and others, which have already announced their intention to withdraw from the national bond markets or are currently in the process of drawing them up, but it would not necessarily a negative effect for the euro if it allows interest rates to rise from historic lows without fueling concerns about solvency in the less financially resilient regions of Europe. 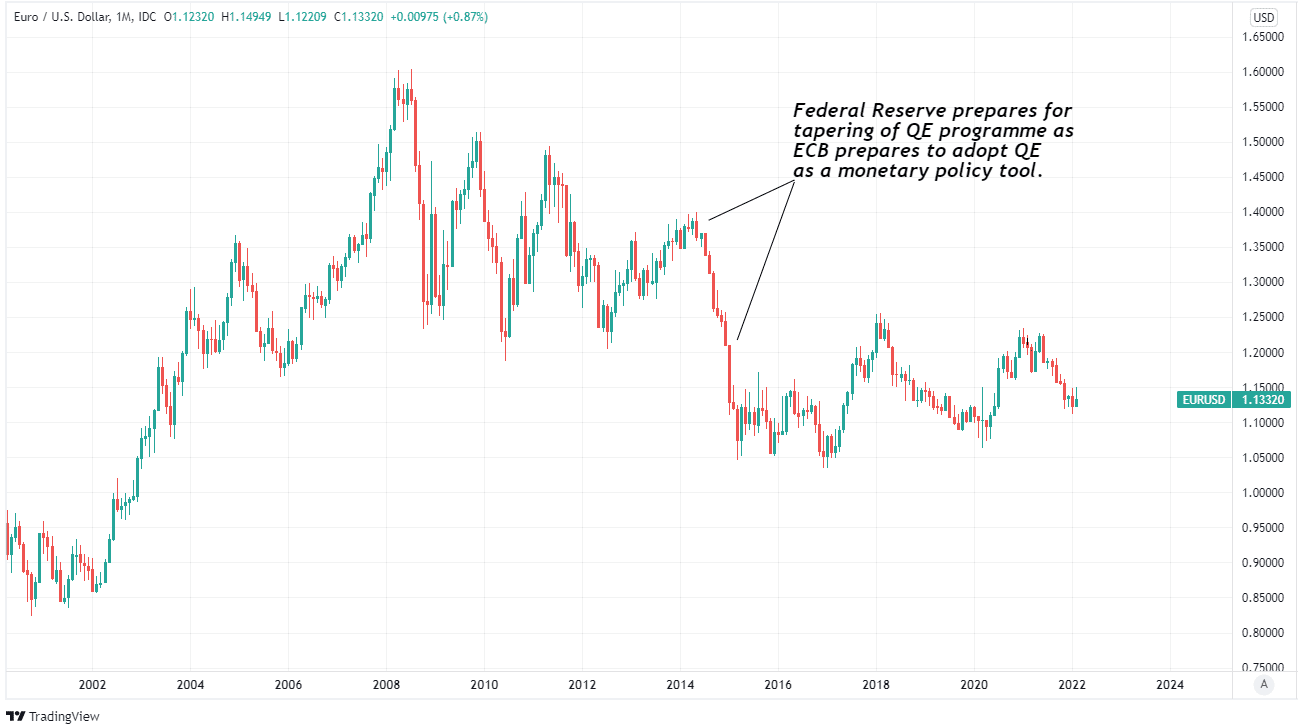 Above: Euro-dollar exchange rate shown at monthly intervals. Click on the image for a closer inspection.

Photo Workshop ECOWAS Energy Updated Policy Accra, the capital of Ghana, is hosting a regional workshop to validate the study on the update of the ECOWAS energy policy from September 7 to 9, 2022. This workshop, which is part of the program “Improvement of Governance of the Energy Sector in West Africa (AGoSE-AO)” aims to […]