The first is that children do not have the right to vote, while other groups such as the elderly vote in large numbers. The other is that when we start talking about the situation of children, the discussion often slides to the effects on the children’s parents – for example, the incentives for adults to work or to marry or have more children. . Concerns about incentives for parents are of course legitimate, but the situation of the children themselves also matters.

A bipartisan group of scholars under the name of The AEI-Brookings Task Force on Children in the United States has produced a report on “Rebalancing: Children First” (February 2022). Although there is a chapter at the end on adolescents, the report mainly focuses on children under the age of 12. Overall, here is the philosophy:

The working group proposes, in short, to rewrite the generation contract. In 2019, the share of the federal budget devoted to children was 9.2%, and the share devoted to the adult portions of Social Security, Medicare, and Medicaid was 45%. … This allocation is a statement of national priorities—the priorities that the task force agrees need to change.

The underlying issues have been the same for a few decades now. In the United States, about one in seven children live in a household below the poverty line. The proportion of American children raised in a household with two parents present has declined over time, and the report examines a considerable body of evidence that children who grow up in stable two-parent households have (on average, and with some exceptions sure ) higher education and health earnings over time. 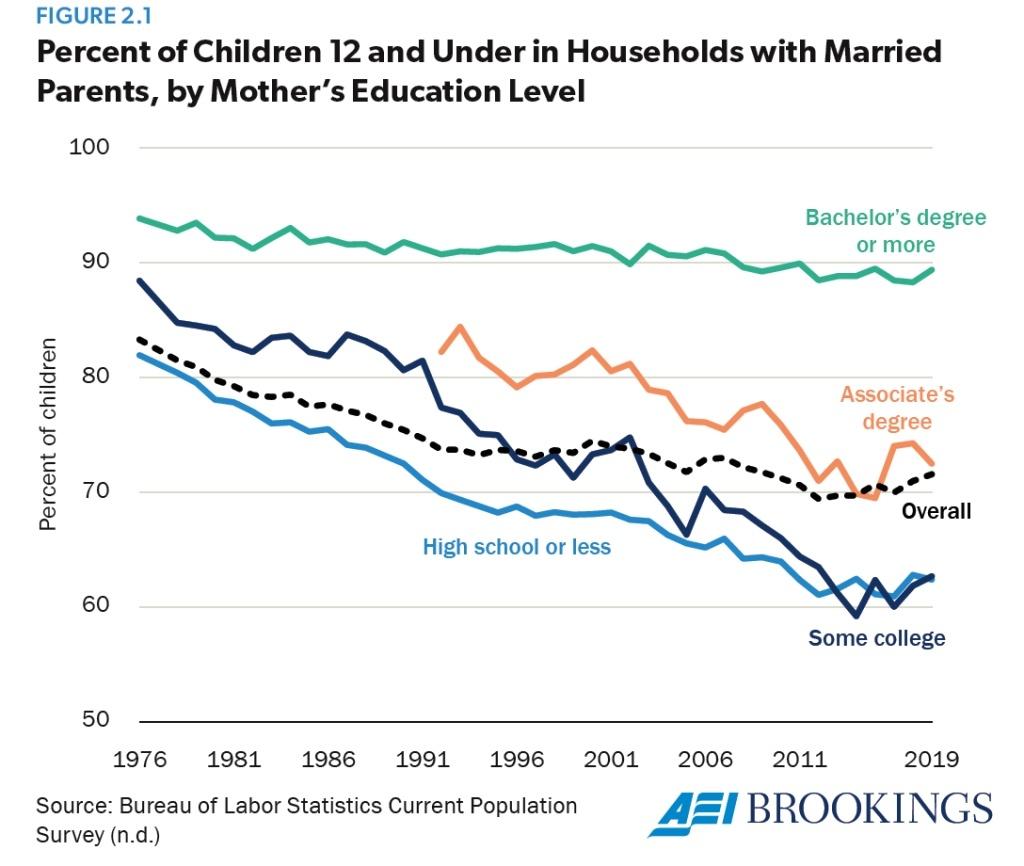 We know that children who grow up in low-income households (on average, and of course with exceptions) perform worse on a variety of measures: education, health, crime and others. Here is one of many measures, using a child’s eligibility for a free or reduced price school lunch as a measure of poverty, here are the shares of those who score higher than those who are proficient in reading and math in 4th year. Again, I agree that some kids take big leaps after 4th grade. But if only a quarter or a fifth of a group is proficient in fourth grade, that group will have a harder time moving forward. 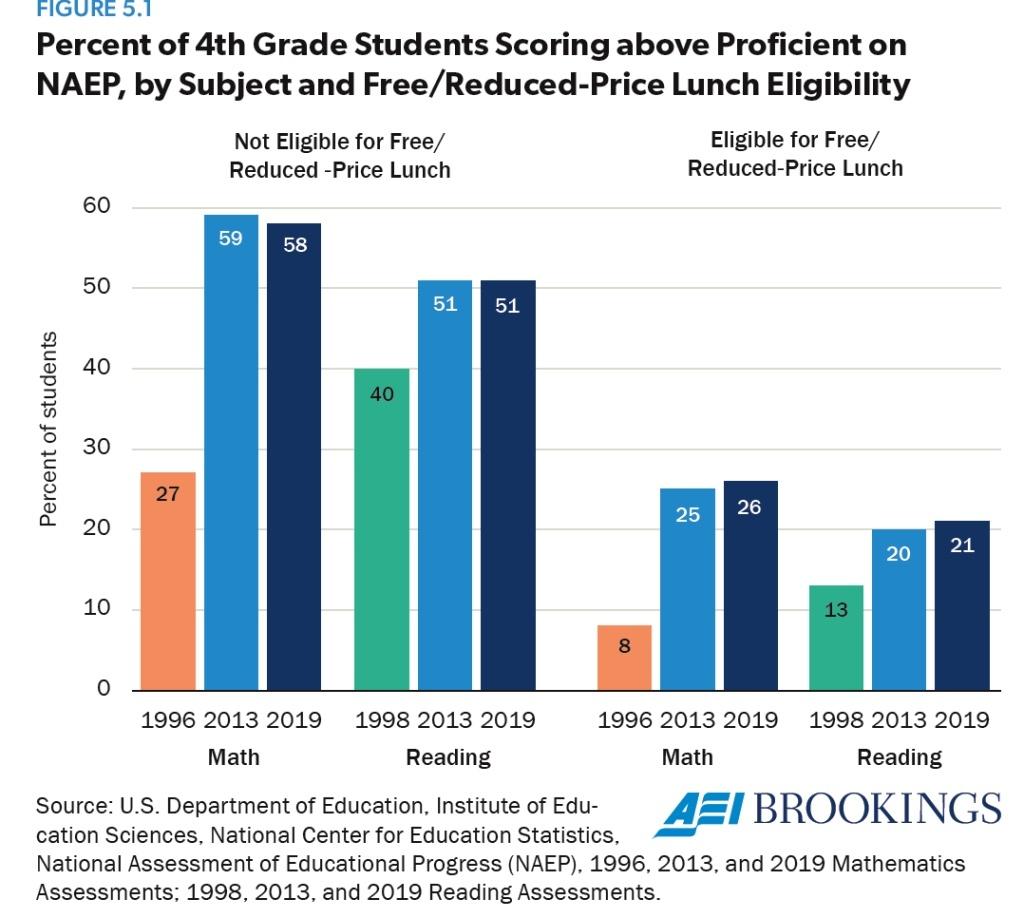 Perhaps what interests me most about the report is the accumulation of research data on how the programs benefit children. For example, the Earned Income Tax Credit is a federal program that provides a “refundable tax credit” to low-income working families.

The EITC is also having a significant impact on the fight against poverty, having lifted 5.6 million people, including approximately 3 million children, out of poverty in 2018. The EITC has been expanded several times since its introduction in 1975, and researchers were able to study the impact of these expansions to estimate its impact. Since the EITC is only available to families with positive labor income, it leads to increased employment, which further increases family incomes (Hoynes and Patel 2018; Schanzenbach and Strain 2020) . The EITC studies therefore measure the combined effects of increased income as well as changes in parental employment – likely positive insofar as employment brings additional income to the family, but potentially negative in extent that children attend a poor quality child care program or receive a smaller investment of time from their parents. The EITC has been shown to improve a wide range of outcomes for children. Infant health has improved, both by increasing average birth weight (Baker 2008; Strully, Rehkopf, and Xuan 2010) and by decreasing the proportion of low birth weight infants (less than 5 ,5 pounds) (Hoynes, Miller and Simon 2015). The EITC also improves academic outcomes, from test scores to high school graduation and college enrollment (Bastian and Michelmore 2018; Chetty, Friedman, and Rockoff 2011; Dahl and Lochner 2012, 2017).

Another example is the “food stamp” program, renamed a few years ago the Supplemental Nutrition Assistance Program (SNAP):

SNAP provides food stamps to low-income families to use at the grocery store and reaches a large number of families. In 2019, 10.9% of the population participated in SNAP, with average monthly benefits of $258 per household, or about $130 per person. SNAP is estimated to have lifted 3.3 million children out of poverty in 2016. Unlike the EITC, SNAP is not conditional on work. Access to SNAP has also been shown to improve the health of infants at birth, increase birth weight, and reduce the incidence of low birth weight infants (Almond, Hoynes, and Schanzenbach 2011; East 2018). The availability of SNAP to children under 5 has also been shown to improve their parent-reported health status during adolescence, potentially through reduced school absences, doctor visits, and hospitalizations ( Eastern 2020). Additionally, children with access to SNAP had better health in adulthood, measured by lower obesity rates, healthier body mass index, and fewer chronic diseases, such as diabetes and hypertension. arterial. Similarly, access to SNAP during childhood improves later education and economic outcomes, such as increasing high school graduation rates by 18 percentage points. SNAP during childhood also leads to better outcomes for women, including higher earnings, higher family income, better educational attainment, and increased employment rates (Hoynes, Schanzenbach, and Almond 2016).

Here is another example of a program with targeted food support for households with pregnant and postpartum women:

Another nutrition assistance program, the Special Supplemental Nutrition Program for Women, Infants and Children (WIC), provides targeted support to pregnant and postpartum women and those with young children to purchase certain products. food. WIC has been shown to increase the birth weight of infants born to mothers who receive WIC benefits (Hoynes, Page, and Stevens 2011; Rossin-Slater 2013). Prenatal participation in WIC also leads to a reduction in later diagnoses of Attention Deficit/Hyperactivity Disorder (ADHD) and other child mental health problems and reduces the chance that a child will repeat grade to year. school (Chorniy, Currie, and Sonchak 2019).

My main point here is that there may be a tendency to think of the EITC as just a program that provides work incentives and extra income, or to think of SNAP as just a program that helps the poor buy food. Thinking of anti-poverty programs primarily in terms of their effect on reducing the poverty rate is not wrong, but it is limited. It is perhaps overlooking the most important benefit of these programs, namely their demonstrated ability to provide long-term health and educational benefits to children from low-income families, which in turn, has lasting consequences for the future of these children as workers and citizens.

Many policy measures taken during the pandemic were aimed at replacing household incomes or keeping businesses afloat. However, children from low-income families have been disproportionately impacted by the pandemic, including in particular the effects of bringing K-12 schooling online during the pandemic. A political agenda for children was expected before the pandemic, and this was before a situation where many children spent two years being hampered in their normal social and educational development.

A political instrument, a political objective. Or at least no more targets than there are instruments. Economists have known this for a long time: the great Dutch scholar Jan Tinbergen, co-winner of the first Nobel Prize in economics, pointed it out more than half a century ago. But try telling that to U.S. trade policymakers. […]

After more than four decades of inaction, Papua New Guinea’s electoral boundaries don’t match the people, but political interests are preventing much-needed change, writes Benjamin Raue. In less than two months, voters in the largest country in the Pacific, Papua New Guinea (PNG), will head to the polls to have their say on who should […]

By Dr Laksiri Fernando Although the federal election was held on Saturday, May 21, Saturday. people had the ability to vote by mail before. Even on Election Day, the Election Commission allowed people to vote by telephone. In Australia, as in 20 other countries, voting is compulsory. In addition to the “right to vote”, these […]